As quite rightly pointed out by my dearest Miss G, this blog has become very serious of late. I think it's high time for a little lightening of the tone, so I took some photos of the ol kittens, cos lets face it, kittens cheer EVERYONE up!

We've been having plenty of adventures with them recently, cos it's been ridiculously cold over here the last week or two (-6 C frosts and hardly above zero all day at times). And what with grey's little bald patch, we've let them stay in most nights. And such things give you a great deal of insight into cat habits. Such as the somewhat surprising penchant for muffins. Apple muffins to be accurate. I'd left some fresh muffins on the kitchen table, well covered, but they managed to pull one off (very naughty - we've been trying to train them off the table, obviously). I noticed soon after, but since it was wasted anyway I thought I'd let them keep it, expecting them to give it a bit of a lick (guess they like the buttery smell). A couple of minutes later I wandered back and...nothing but a couple of crumbs left! Turns out kittens will demolish entire muffins! And kittens don't get sugar highs (thank God, they're bad enough without being high), they just crash out in a daze for a few hours! At least muffins contain a reasonable amount of butter; they've since polished off several slices of bread when left unattended! And we have started feeding them now, so they're not just starving or anything - they just like baked products! Wierdos. I need to explain 'carnivore' to them sometime, obviously.

Here's a couple more photos of em taken over the last wee while. 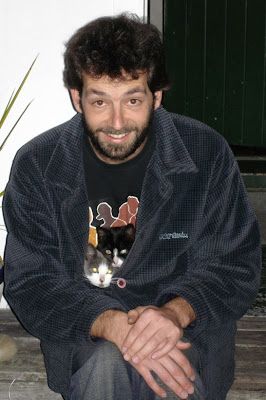 On a cold night, they both got tucked up in Sean's coat - super adorable! 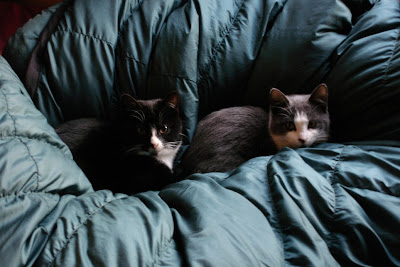 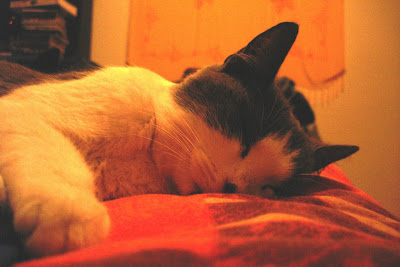