I haven’t updated for ages because life has been ridiculously manic! A month and a hlaf ago I finished my PhD, and since then I’ve corrected and submitted my final thesis, submitted a paper for publication (and unfortunately had it rejected), been for a week holiday with my parents in NZ, graduated, sold all my stuff, packed up and sorted all my life out ready to leave NZ, left NZ, had a couple of flying visits to family and friends, moved to Bristol, found a flat, moved into it, been cleaning all the stuff that the landlord was too lazy to do (which is a lot), turned the garden from a jungle back into a garden and started my new job! That’s a long sentence, cos it’s been a long month and a half!

The holiday with my parents was great – one last cruise round the south island before leaving. We did stuff I’d never usually do, which was great – like fishing (my dad caught a big red snapper which made a fantastic lunch!) and horse-riding (with me on the one who thought he was a race horse!). Also got a chance to go see an ‘exhibition’ organised by Banksy and other street artists in . They took over a tunnel and sprayed on most available surfaces! Plus there were installations and stuff, like a tree filled with CCTV cameras including a nest with baby cameras in! Random other artists could come in during the day and do their own work wherever they wanted, so you could see people working on it too.

The new job is going well, with really friendly people in my office. Already been out for drinkies a couple of times with them and got invited over for a fantastic home-cooked traditional English roast! It’s gonna take a long while to get the research up and running cos the cells I’ll be working with take a week to get to the useful stage! Plus there’s equipment which I’ll need which isn’t ready yet, but I’m keeping myself out of mischief.

The new flat is nice, although it takes a while to make it feel like home. We have our own garden which needs A LOT of work, but is slowly getting there. Hopefully the veggies will be in soon, and hopefully I can find a way to keep the MILLIONS of snails away from them. I’ve never seen so many snails in my whole life.

Well, I did get a few nice photos along the way this month, so here ya go: 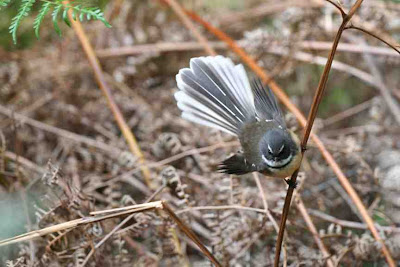 Dad captured this photo of a fantail - he also got lots of shots of branches upon which a fantail had once sat! They're fast little buggers! 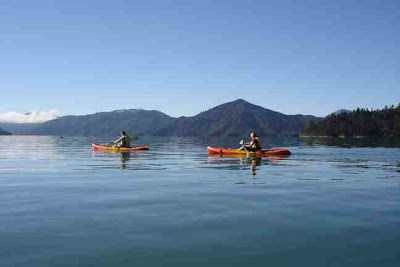 Kayaking in the Marlborough sounds 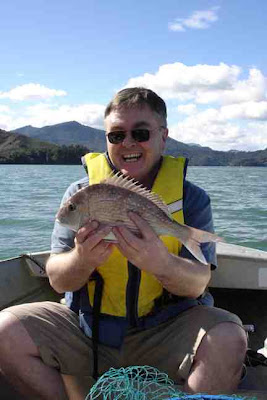 He also caught this impressive fish, which made a SUPERB lunch! 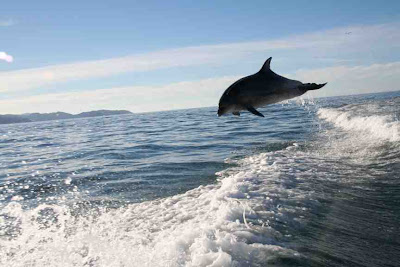 And dad ALSO captured this once in a lifetime shot of a dolphin in the Abel Tasman region.

And a couple of pieces at Banksy's street art exhibition: 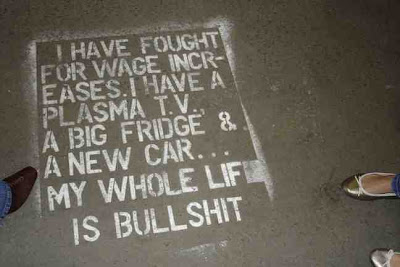 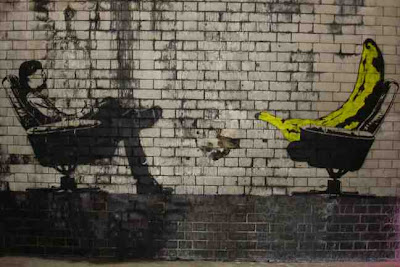 Good to hear you're safe and sound in good ol' England. Have a cup of tea for me luv! Here winter is settling in and the southerlies give us the chills... Thank god for heat pumps!
Lots of sloppy bisous from Maxime who loves the teddy you gave her on her first day (she hugs him passionately, so much we think she'll be into hairy men...) Bisous