We have a cute little wild tomcat who we've known since he was a kitten who hangs out around our house (cos we don't have our own cat so it's now his territory). He is the most unbelievably affectionate and chatty cat and will even come over for a quick stroke late at night when most cats are in killer mode, which is most wierd cos he's a stray cat. We call him squish, for lack of a better name (I think it might of been my fault he ended up with such a stupid name!) . And anyway - Squish had kittens! Three of them and they're incredibly cute! We finally managed to get photos of them, but they're wild too, and they're still really scared of us. Sean is gradually getting one of them (and by coincidence it's the one which I think is the cutest and am seriously considering stealing when I leave!) to come near him so hoepfully eventually we'll be able to play with them all. They're super-playful and chase each other round our garden at night - so cute!
So anyway - we've named one of them (the black one) Monty (after Panesar - at Paul's request!) but we're trying to think of good names for the other two so all entries on a postcard! If any of ya'll have got a cool name for cute little grey/white stripey cats let us know!

My favourite! Look at that cute little face! 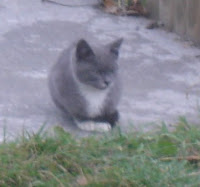 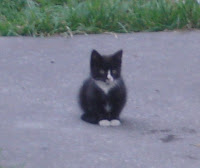 Mother Dear here so you have to take notice. What about cloud, for one of your kittens? Doesn't Aotearoa mean 'long white cloud'? I think those lovely colours look just like a cloud. Oh and those sex education lessons I gave you, come back for a recap.

Anonymous said...
This comment has been removed by a blog administrator.
8:37 am

Like it, mum - although may be a little excessively hippy!

You're right, me and that little fella do have to have a quiet word about family planning eh?!

So we came up with: Stevens (for Cat Stevens), Ty (it looks like the 2nd one has a tie), Aragorn (or any lord of the ring name), Astrophy for the clumsy one (cat-astrophy)...Mmmh we'll get back to you when we're a bit more drunk. Bisousssss

I'm thinking mouse, kiwi and cat. In what ever order you feel appropriate.

hee hee, or beer and bear!

An update, pleaaase. Did you choose any names yet?

:-) sorry miki! Well we haven't seen the two grey ones much recently and we certainly haven't managed to get close to them, so we haven't really decided which of the names suits them yet. I'm afraid "cat" puns are currently low in the pile (!) but I "ty". We have seen monty quite a bit though, and he definately seems to be getting braver. He sat near and watched while I stroked Squish the other night.
When we finally give them names I'll let ya'll know. Thanks for the input and if you come up with any other gems keep em comin!

Brontasaur and Rex?
Kylie and Jason?
Ooo, Dude and Punk?
Drum and Bass?