'If there's one thing you can say about man-kind, there's nothing kind about man'

You may recognise that I am having a Tom Waits period. Fear not, my faith in mankind has not been crushed entirely! His 'dulcit' tones are the soundtrack to this post, and I couldn't think of a better title, although it's not quite as amusing if you don't 'sing' it like he does! Maybe my new theme for post titles will have to be classic Tom Waits lines. That man is a musical genius!

Not much been going on round this neck of the woods, but I'll try to hussle up a couple of stories. Just about surviving a legendarily crappy English 'summer'. I've been promising Sean an Indian summer for a couple of months now, but what we currently have is flash flooding. Nice to know the man upstairs has a sense of humour! Been to Bath, an ancient Roman city right next to Bristol, twice in the last couple of weeks, so can show you a couple of photos. As the name might suggest it was the site of Roman spa baths so my mum and I went for a lovely relaxing girly trip to marinade ourselves. The week before Sean and I had done the opposite of a relaxing trip by cycling there and back! There's a cycle path which follows an old trainline, which, whilst pleasantly hill-free, is pretty long at 16 miles. My intention was to cycle there, and then take a leisurely trainride back. Sean had other ideas and convinced me to cycle home again too - so it was a 35 mile trip once we'd also cycled up and down the hill to uni. We were knackered that night, but not at all achy the next day, which was a pretty proud moment - all those morning hill climbs must be paying off!
Here's a cuppla photos: 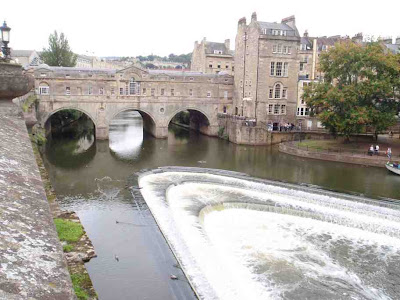 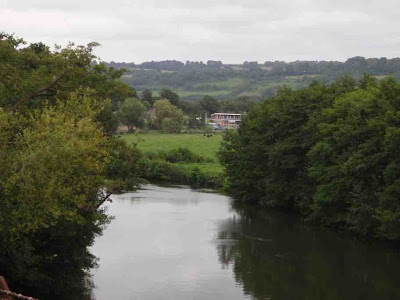 Bristol seems to be king of the festivals, with harbour, balloon and kite festivals already this summer. The Bristol Balloon festival is particularly nice, with hundreds of balloons taking part in a mass ascent. Unfortunately the weather prevented all but one of the evening flights, but below is a shot of the one that made it, although the resolution doesn't do justice to the number of balloons and majesty of the event. My poor schedule reading skills meant we missed out on seeing the 'night glow' where anchored balloons light up their flames in time to music with fireworks, but we did get to see the red arrows. The kite festival we also missed, although ironically whilst it was the wind (and rain for that matter) that brought the balloon festival down, there was a distinct lack of wind on the weekend of the kite festival. More evidence for God's sense of humour! 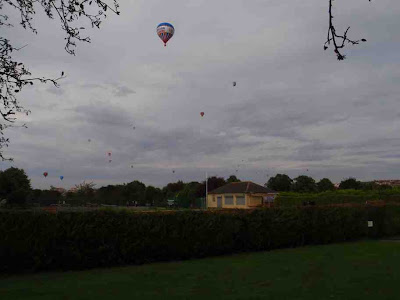 And in other news, to cheer myself up in a brief moment of glum (regarding other kittens which I don't think I've ever mentioned) I wrote to the guys who took our little cuties, Monty and Grey (now Lucy) and...got photos! They definately look a bit bigger and more grown up, but look as happy as ever. Evidently enjoying each other's company/killing each other as much as ever. And they have their very own little tent - something we never afforded them, so they've obviously landed on their feet with their new owners! Lovely to see that we did the right thing by at least some of the 'maison de bonheur' kittens.

So yeah, no other tales really. I'll have to start writing a few posts about ideas and thoughts, rather than waiting for interesting stories, which are relatively few and far between! Hope ya'll are well.
Posted by A at 10:06 am


I have been reading your blog and thus got a pretty fresh update of the situation... I miss you, you and Sean!
My return to Europe went pretty well, I nearly scored two hostesses (Antoine can confirm on the first one) in the SG airlines flight. Not bad. Then the return in France was a bit hectic. I managed to get myself kicked out of a Parisian taxi in less than 2 minute, but the guy was obnoxious. My blood pressure then decided to go down to 8 for a while, so Britanny and Mum's food were most welcome for a couple of weeks. I then went to a festival in Finistere and saw great great gigs, but fuck: 1- The French kids really have a problem with alcohol too 2- lots of very nice music, but the fat groovy kiwi sound was absent of the line-up 3- 20.000 people a day in a festival, it's too much
Anyway, some legendary concerts acts took place there: Keziah Jones, Orchestra baobab (absolutely divine), Ojos de Brujo, Victor Deme, groundation, Alela Diane, etc etc etc and much more. Anyway, I then decided to go back home at my parents' place for like 3 weeks or so. And there: I did not do much, just helping them a bit and trying to spend time with my grandparents. I started my postdoc here in Sweden two weeks ago, and it ain't violent at all. 8.30-16.00 I think is a regular day, and they pay me (a lot) for that! My PhD (Philanthropic Degree) in slavery is over, clearly! My new city clearly makes me miss Christchurch though. We are talking of a hole in Northern Sweden with 35000 inhabitants, there is no bloomen pottery class or concert or anything. Yet, it is a pretty nice environment as we are surrounded by the forest; a major river flows by. I live in a student flat and I am the only non-Swedish among us 11. My neighbours very fortunately belong in large proportions to the female gender, and they carry evocative names such Maria, Helena, Kajsa, Nelli... Gosh, I am glad they are nurses, imagine what a drama it would be if I was to faint at home and have nobody around me to help! Well, so life has got really slow up here. It's cold too actually. Damn, temperatures have already been flirting with the most arabic number of them all: zero. I miss my short, my flip flops and my waveski. I adore my internet connection that keeps me somehow connected to the world (or at least gives me the illusion of being part of it).
That said, there are lots of cycling tracks here, and you know that you are most welcome here and give them a go, you two little teddy bears in chocolate coated with rose syrup!
Right, Lena-Maria is begging me for a shag, must go now (I hate being a whore),


PS: I know what it's like to be in town and be reluctant to buy stuff that doesn't have a bit of an ethical sticker to it: it sucks. But hey, I guess it's the good news telling us that we still have a soul! Bisous